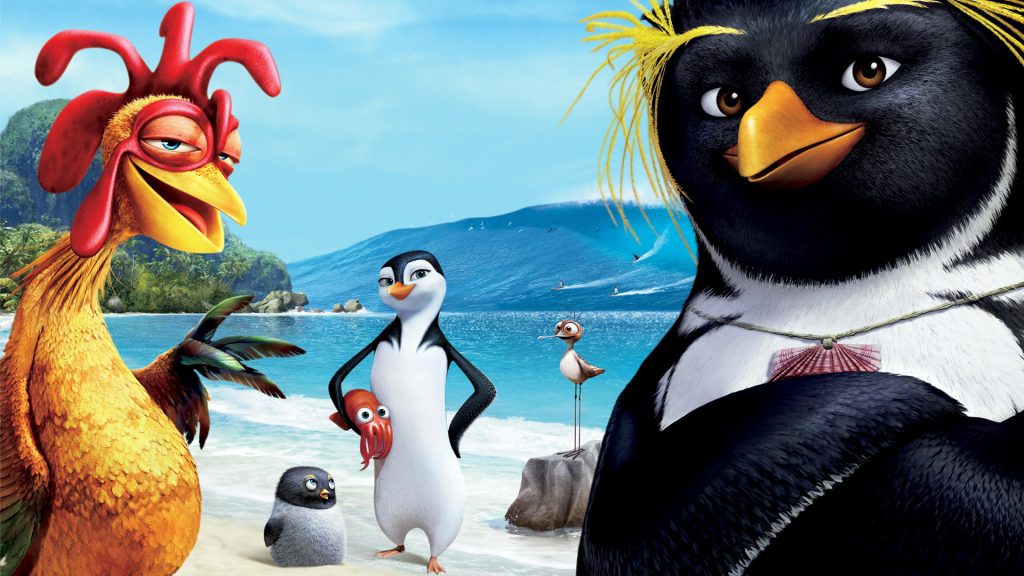 Released in 2007, during the surge of penguin movies, Surf’s Up is a unique animated mockumentary exploring how penguins are the ‘real’ inventors of the worldwide sport, surfing. A documentary crew (ironically, Brannon and Buck cast themselves) follow the journey of Cody Maverick (Shia LaBeouf), a Rockhopper penguin from Antarctica who dreams of becoming a professional surfer. After jumping at the chance of competing in the ‘Big Z Memorial’ surfing contest, Cody arrives at Pen-Gu Island, a tropical surfing paradise. Under the guidance of Geek (Jeff Bridges), the hidden pro-surfer Big Z, Cody learns that there is more to life than winning and in return reminds Z what it means to face our fears. In the final competition, Cody saves his friend, Chicken Joe (Jon Header) from Tank ‘the shredder’ Evans (Diedrich Bader) rather than win himself, while Big Z finally reveals himself after years in hiding. The film ends with the characters doing what they love best, blissfully surfing the glistening waves during sunset hour. The fantastic CGI and impressive, acclaimed as accurate, oceanic action visuals, together with a clever script make everyone want to belong to the Surf’s Up world of surfing, especially one occupied by penguins.

What stands out for anyone who watches this film is that it is ‘not like any other animation ever made.’ [1] As a hybrid animation, Surf’s Up combines elements of documentary style with aspects of comedy to create a parody of real surf documentaries. Although children may not pick up on the (very comical) documentary elements, adults are certainly able to find enjoyment in watching animals being interviewed by humans in this quirky oscar-nominated number. Equally, by taking the format of ‘family film’ animation, Surf’s Up uses bright funny cartoon animals to engage with their main audience, children, while employing underlying witty gags for the older viewers. Animation relies heavily upon anthropomorphism, ‘attributing human emotions to the non-human’, [2] a practice which forms the basic idea behind Surf’s Up. Here, penguins, and various other animals, are placed in the position of human beings, as they are given human voices and characteristics which we can identify with. Thus, we are invited to think about our own behaviour as we attempt to uncover why Chris Jenkins decided to cast animated penguins, rather than humans, in this refreshing comedy.

Throughout the film, the reality crew directly interact with the animal characters on screen. The genius use of grainy video footage and handheld camera movement, synonymous with documentary style cinematography, humanises the action. The camera lens substitutes for the human ‘eye’, ever fascinated by animal life, while the penguins themselves are aware that they are being filmed. In this way, the human crew and animals take part in John Berger’s notion of the ‘shared gaze’. [3] Through the act of looking, Surf’s Up is self-conscious of the way ‘humankind recognises itself in the implication of the look it shares with animals.’[2] To explore this, we can analyse the film’s opening scene (Fig 2), where Cody is interviewed by the crew. Whilst being asked personal questions, Cody looks directly at the camera, thus breaking the fourth wall to spotlight similarities between the human/non-human. Instead of simply being observed, Cody is given agency here because he can look straight at the camera. His ability to engage in a human-like conversation, contemplating and responding to questions, shows how Jenkins uses penguins to represent human beings. The shared recognition between penguin and human allows the audience special insight into the lives of penguins, animals we do not typically get to explore in our daily lives. Because we see from the perspective of the crew, we become ‘participants rather than spectators’,[3] directly involved within the feelings and thoughts of the characters.

By positioning real-life surfers, Rob Machado, and Kelly Slater in the bodies of penguin presenters, Jenkins brings a sense of reality into the film (Fig 3). Consequently, the boundary between real and fiction is blurred in Surf’s Up, urging the audience to view the penguins as ‘quasi-human’, [2] almost real people.

Alternatively, the act of looking transforms Cody into a form of spectacle which demonstrates the consumerist nature of mankind, obsessed with monetary gain. Aware of its quality as a film, Surf’s Up highlights how the crew (real life producers) make money from filming animal life through the format of animation. Therefore, we are forced to question the morality behind real animal documentaries such as Timothy Treadwell’s Grizzly Man. [4] By purposefully making visible the crews’ equipment (microphones, cameras, lights), Jenkins illuminates how problematic it is when humans intrude upon animal life, entering natural spaces which they shouldn’t. Cody is alarmed by the presence of the microphone and naively speaks to it ‘What’s up man? I’m Cody.’, [5] displaying his limited knowledge of human life.

Geek, (Big Z) also recognises the alien role of humans within the penguin world when he asks, ‘Who are all those guys?’ [5] and proceeds to (comically) throw clams at the cameramen. In this scene, the crew use a harsh light to film the penguins (Fig 4) so that the audience can see them (its nighttime), again, emphasising their lack of respect for the natural world. For me, one of the messages the film tries to get across through comedic real-life cinematography is that animal life will never be safe until humans stop intervening.

The human-animal dichotomy is dismantled in Surf’s Up as human conceptions such as race and ethnicity are addressed within the penguin world. Using fantastic visual design, Jenkins gives different animals specific attributes depending on where they come from, just like humans, whose physical traits are largely dependent on inhabitance. No penguin looks the same in the film, realistically representing the vast amount of penguin species; from Lani (Zooey Deschanel), a female Gentoo penguin to Big Z, the largest species of penguin, the Emperor.

Minute details are captured to place characters in opposition. For example, Tank displays noticeable Heterochromia iridum (a common feature of cartoon villains), one eye is blue, and the other is amber while Z is designed with gorgeous Hawaiian flower tattoos along his body. The film does this to represent all of humanity, everyone can relate to at least one character on screen. After being asked at the Surf’s Up premiere why penguins resonate so much with humans, Sal Masekela replied ‘Because they are neither black or white.’ [6] This is hugely important because it means that any audience can relate to the characters, regardless of race or skin colour. Penguins (more so than other animals) resonate with humans because they share many similar attributes, from the way they walk, to their need for companionship. It has even been proven that the Gentoo penguin is able to bodysurf to get to shore. [7]

In a scene where the recruited surfers arrive at Pen-Gu Island, the penguins embrace what Paul Wells describes as the ‘hybrid humanimal’ [2] as they are displayed carrying out human activities such as sunbathing, surfing, and even presenting their own ‘sports penguin entertainment network’. This clip is satisfying for the audience because we acknowledge a clear jump from the typically penguin-like behaviour occurring in Cody’s home, Shiverpool, where the colony are animalised in their different roles (fish sorting or egg incubating) to Pen-Gu, where the penguins have lost all sense of animality. Wells summarises this transformation, ‘This humanimal will adapt to the changing conditions of habitat in relation to its established personality’. [2]

Jenkins recreates the structures and practises of the human world and mirrors this comedically in the world of surfing penguins. There are penguin statues, stalls, a head in the hole board and sexy (penguin) chicks Hawaiian dancing – a penguin surfer’s dream. In my view, the film does this because ‘it is easier to humanize animals than it is to humanize humans’. [2] The penguins are used as a vehicle for the expression of human behaviour and emotions in a humorous way. A good example of this is shown when one of the penguins uses his wing to pretend that he is a shark to scare other penguins swimming. Here, Jenkins plays with humans’ irrational fear of sharks while ironically making a gag out of the fact that sharks are a natural predator of penguins.

The film persuades the audience to see ‘human and animal as intrinsically the same’ [2] by making gags out of stereotypical human tropes which permeate film. These include the romantic meet cute between Cody and Lani, the comedic side-kick Chicken Joe who, like donkey in Shrek, [8] provides the audience with fall-back humour, the coach/guru figure who teaches a protagonist who is lost (Geek helps Cody figure out his purpose like Mickey in Rockey [9]), the evil villain who has (might I add) a weird obsession with his trophies, and the happily ever after ending. Jenkins remakes these models to highlight how penguins are “just like us, really.” [10] We become more emotionally invested in the animated characters lives because we can relate to these typical human themes. We are desperate for Cody (the outcast) to achieve success in his surfing aspirations but also in his relationships with his new-found family, Joe, Lani, and Z.

Cody and Z’s (on land) training scene, exemplifies this creativity as Jeff and Shia’s voices bounce off one another in a playful energic manner, creating countless laughs for the audience as they play pranks on one another.

A key element in recreating human beings through animated animals in Surf’s Up, is in the way the directors encouraged the actors to be as creative as possible in the recording room. In this voiceover ensemble video (Fig 18), we see how the actors were allowed to improvise and act out scenes with one another to create real chemistry, which for me, certainly comes across on screen. [11] This is effective because it encapsulates how humans genuinely conversate, something I think was a top priority for Brannon and Buck while filming.

The final gag I want to think about is the film’s introduction to the wild flesh-eating ‘Pen Guins’ who come across Chicken Joe in the rainforest. Playing on the word ‘penguin’, Jenkins introduces these hilarious characters to contrast with the human-like penguins. They are not able to communicate like the other animals and instead speak their own gobbledygook language. They capture Joe, tying him to a stick and then proceed to put him into a boiling pot of water over a firepit. The audience know that the ‘Pen Guins’ are intending to eat Joe, while Joe himself is completely oblivious to the threat. Joe is either incredibly stupid or perpetually stoned, you figure it out? Instead, he believes that they are worshipping him. Here, the comedy derives from our privileged knowledge of what is happening compared to Joe’s misunderstanding. It makes us laugh because while the ‘Pen Guins’ are the closest thing to animality within the film, the fact that they have crafted weapons and have painted tribal paint on themselves ironically aligns them more closely with mankind. They are the hunters rather than the hunted. The non-diegetic song, ‘What I like about you’, playing in time to the ‘Pen Guins’ tribal dance is funnier than ever, what they like about Joe is that he is about to become their tasty meal.

Surf’s Up uses comedy to break down the human/animal binary in three main ways, documentary style, anthropomorphising animals and making gags out of stereotypical human tropes. The cinematography, visual and literary design openly ask the audience to reflect upon our relationship with animals, while discreetly encouraging us to find more appreciation for animals’ abilities. Afterall, the overall message of the film is, to find joy in life through doing whatever makes us happy, whether we are human or non-human. The key feature that makes Surf’s Up stand out is its ground-breaking use of mockumentary style which sets it apart from the contemporary films of its time, such as Happy Feet. [12] Ultimately, Surf’s Up aims to create fun for all the family in this unparalleled animation where entertaining penguins and a stoner chicken show us some of their sickest moves.