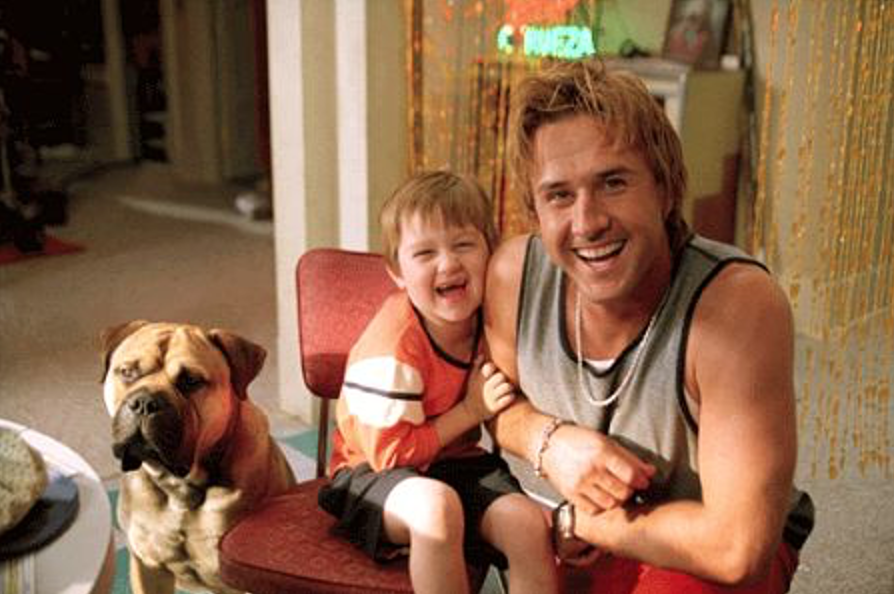 Agent 11 is one of the most decorated agents in the FBI, but he doesn’t always play by the rules. This time, his vicious attack on mob boss Sonny Talia (Paul Sorvino) has made him the target of a hit.

When internal corruption leads to his Witness Protection being compromised, he must escape the clutches of two cold-blooded mafia hitmen by hiding in the back of a mail van. This is where he first meets James and mailman Gordon, who, after some deliberation, allow him to come and live with them while the mafia continue their hunt. Gordon eventually learns to love Agent 11, despite him being the natural mortal enemy of the mailman – a dog.

See Spot Run is a family comedy that follows Agent 11, renamed ‘Spot’ by Gordon,  as he learns to release the shackles of the FBI and enjoy life, all while successfully fighting off two hapless hitmen and their boss.

In a family comedy such as See Spot Run, the protagonist is never going to come to any real harm – especially if that protagonist is a dog. With the primary audience being children, it is important to ensure that proper treatment of animals is prioritised, and that Spot is shown love and care by the ‘good guys’, even if the ‘bad guys’ are out to kill him. However, since See Spot Run is primarily a comedy, it does include moments in which Spot’s stereotypical dog-like nature is utilised and objectified for the sake of comedy. For example, his requirement to excrete outside is utilised in an extended comic sequence that results in Gordon stepping in, slipping in, and then landing in this excrement.

Ensuring that positive treatment of animals in See Spot Run is shown on screen ‘appears to sit at odds with a culture that is also heavily dependent on animal exploitation’, as proven by scenes such as this one. Moreover, See Spot Run also embodies characteristics of an action movie and, as such, shows Spot performing many tricks such as jumps in many of the action sequences, although it has been confirmed that ‘the dog was not in danger of hurting himself’[1].

Despite repeated insistence that Spot is an agent like his human counterparts, and that he and Murdoch are ‘a team’, See Spot Run consistently proves otherwise. His evident intelligence and use to the humans he serves earns him some level of respect, but it is only at the end of the movie that he is bestowed with any agency – when a human’s emotions are at stake.

Spot begins the movie as a tool for the humans he works for, with little-to-no agency over his own life. This is evidenced through his following of commands from Agent Murdoch, such as ‘search’, as well as the fact he is made to wear a shock collar around his neck. This shock collar is shown later in the movie to cause a lot of pain to Gordon, when he wears it in order to show Spot how to ‘act like a dog’.

Gordon disrespects Spot’s intelligence, referring to him as a ‘big stupid dog’ – despite everything we have seen prior to this suggesting otherwise. He then proceeds to play with a ball, sit, lay down, lick his paw and chase his tail – all stereotypical characteristics of a dog. In doing this, he is performing the role of a dog, similarly to how Spot performs the role of a human when he is an agent with the FBI. However, here Gordon’s performance is done for comedic value, while showing us Spot in the FBI was done to convey his intelligence and abilities to the audience. This suggests that dogs are a subservient species below humans, and therefore a human performing the role of a dog is ridiculous, but a dog performing the role of a human is impressive.

Since this is a family film with a primary audience of children, the pain from his resultant electrocution is played for laughs and we are asked to forget that Spot would have been wearing this collar, and therefore would have experienced a similar level of pain on an almost-daily basis. Although the production of See Spot Run utilised ‘general humane training techniques’ such as ‘buzzer patterning, verbal and visual commands, and food rewards’[1], it is highly suggested that the FBI in the world of See Spot Run did not do the same.

Although Murdoch refers to Agent 11 as his partner, and the two of them as ‘a team’, portraying him as being an equal with Murdoch himself, he is then relegated back to a lower order of being as Murdoch suggests that losing Agent 11 is ‘like losing [his] gun’. Referring to Agent 11 in simile with an inanimate object exemplifies the type of objectification that he and all of the FBI dogs undergo in See Spot Run. Furthermore, while working for the FBI, Agent 11 has not even been given a name, further demonstrating his inferiority compared to the human agents.

The first time in See Spot Run that Spot begins to show any agency over his own life and acts without direction from a human is when he escapes the Witness Protection van. He once again demonstrates his intelligence by understanding the danger he is in and proceeding to escape it – although it is not difficult for Spot to look intelligent when countered by the two senseless hitmen that have been sent to kill him. Despite showing agency in this escape, he then ends up meeting James and Gordon, who subsequently remove his agency again. This is never demonstrated more aptly than when James asks, ‘can we keep him?’ both to Gordon and to his mother who isn’t even present. James’ mother thinks that he is talking about a toy dog, and consequently agrees to let him keep Spot – proving that a human who is unaware of Spot’s existence has more agency over his life than he does.

Despite Spot’s obvious intelligence – shown to be more than most, if not all the human leads – this does not prevent him from being exploited for comedic purposes. For example, the aforementioned sequence involving his excrement. Since we see Spot through the ‘human gaze’[2], this violates and exploits his canine nature.

The stereotype of a feud between mailman and dog is utilised towards the beginning of See Spot Run, as we see Gordon attempt to deliver mail to the houses of Bleeker Street, or as he puts it, ‘dog town’.

This results in an over-the-top, satirised version of the ‘Suit-Up of Destiny’[3] trope, as hero Gordon prepares to fight evil – a mail route full of dogs. This trope is even underlined by a heroic extra-diegetic score. Despite the satire, this presents the dogs on the route as something to be feared, which is again played for laughs as we are then introduced to the dogs, which are all about knee-height for Gordon.

This begs the question, why shouldn’t Gordon be afraid of these dogs? The answer: because they are pets. They are tamed, domesticated versions of the wild beasts they once were, and consequently, a residual fear of these fluffy, little ‘man’s-best-friends’ is laughable. Once again, dogs are presented as subservient to humans, even through Gordon’s fear of them. Malamud (2010) agrees that ‘we don’t like to think much about wild, natural animals, because we have just about extinguished wilderness and nature’[2], and as such, the idea that these dogs are anything but the domesticated pets we see now is discredited.

Gordon and Spot do not see eye-to-eye from the outset, and it is only due to Gordon’s infatuation with James’ mother, and consequent desire to keep James happy, that he decides to keep him. When he first begins living with James and Gordon, Spot finds it difficult to adapt to a life outside of the FBI, and consequently refuses to play. This results in Gordon and his friends referring to Spot as ‘broken’. Spot declines to act like a stereotypical dog, and for once shows agency over his own decisions – which results in humans thinking that he is ‘broken’. Gordon and James want a dog that will play, not one that can think for itself. Subsequently, the human-animal relationship is shown here between Gordon, James and Spot to be one of human power and dominance over the animal, which despite Spot’s original reluctance, he ultimately bows to.

Both sets of humans that supposedly love Spot – the FBI and James and Gordon – are shown to love the specific roles that Spot performs. The FBI, for example, ‘love’ Agent 11 because of his detective skills, but they will not allow him to play. James and Gordon, on the other hand, only begin to show affection and love for Spot after he learns to play and can therefore give something back to them.

Murdoch, Agent 11’s partner in the FBI, forcibly removes him from Gordon’s apartment once he first finds him, despite his obvious reluctance to leave. This is a character who earlier in the movie was shown to be under such distress over the wellbeing of Agent 11 that he travelled all the way to Alaska just to check on him.

Yet here he shows a blatant disregard for Agent 11’s wellbeing and instead only appears to care about his own, which he believes Agent 11 could improve. Consequently, once again this conveys a relationship of unequal power between human and animal, and a love for the roles the animal performs disguised as a love for the animal itself. Despite ultimately wanting the best for Agent 11, Murdoch proves that ‘the consequence of most human-animal encounters is the expression of harm via pathways of power’[2].

The only time that humans bestow agency upon Spot is at the end of the movie when he is asked to choose between James and Gordon and returning to the FBI. Gordon convinces Murdoch to let Spot choose by suggesting that ‘he just wants to be a dog’ – consequently conveying the notion that he cannot be both a dog and an FBI agent, and harks back to the previous sentiment of Spot being ‘broken’ because he acted how he was taught to by the FBI. Of course, since See Spot Run falls into the genre of family movie, the family unit is chosen, and the desire of the audience is reflected in the characters.

See Spot Run offers a perspective where the animal-protagonist is more intelligent than the human characters he is surrounded by. However, this does not prevent him from being presented as subservient to his human masters, be they the FBI or his eventual ‘family’ of Gordon and James. Thus, there is a consequent presentation of animals always being below humans in terms of power and authority, regardless of intelligence. Also, he is shown to only receive love and affection from his human counterparts due to roles he performs, not because of who he is himself. This is evidenced mainly through the distinct roles he performs for the FBI and for James and Gordon, and the lack in crossover of him being loved by each.

Despite evident hard work going into a humane production of See Spot Run, it presents harmful stereotypes of animals for comedic purposes, as well as entirely discrediting and disrespecting the main character since he is a dog. Spot has his behaviour decided for him by the humans he surrounds himself with, as the FBI train him to be emotionless and professional, while James and Gordon prescribe him a new personality and don’t stop manipulating him to perform the way they want until he succumbs. Spot is ultimately the possession of humans throughout See Spot Run, and despite him being allowed the agency to decide who to stay with, his options are between two masters. Even when he is finally allowed the freedom of choice, he may only decide between two diametrical roles of subservience.