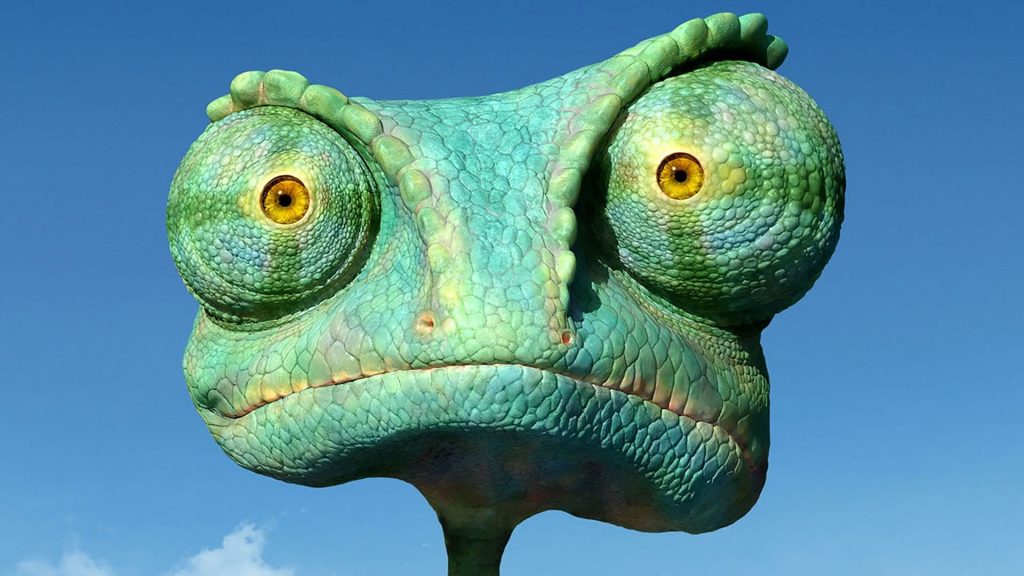 As Rango’s terrarium hits the concrete and shatters, the bleak reality of human nature and the wake of destruction we leave becomes apparent. To humans, animal suffering is a mere bump in the road – literally.

In the opening scene of Rango, the car in which Rango is travelling hits a passing armadillo attempting to cross his once natural habitat; now interrupted by a bustling road. Rango falls from the car and narrowly avoids death, as his owner’s car readjusts and drives away. This particular scene is key in illustrating how seemingly insignificant human actions inflict extremely harmful consequences upon wildlife – even sometimes to the animals we believe we are nurturing, as exemplified by Rango’s disjointed pet habitat. Despite the amusement of the animated animal society at the core of the film, Verbinski incorporates a striking sense of modern and topical geo-political issues into the heart of the plot, arguably to muster a sense of audience reflection.

Prior to his fall, his owners travel in the front whilst Rango is wedged into the boot of the car amongst general household items, like golf clubs and a basketball. The terrarium’s careless position in the car combined with the size of the other objects in closer proximity to the lens shown in Figure Two, both clearly emphasise Rango’s meagre value as a replaceable household commodity.

Rango’s fall from the car was almost certainly an accident. Yet even if we disregard this negligence, the outward appearance of Rango and his terrarium are a blatant indication of the harm caused by his owners. Rango performs, plays guitar, wears a shirt, drinks from a cup, dotes over his pet fish Mr Timms and is highly intellectual, questioning his thoughts and his life purpose simultaneously. The incorporation of these human attributes combine to create an entirely unnatural appearance and home for a chameleon. His entrapment in pet-hood has caused him to reduce to a shadow of his animality, ironically in the very manner that chameleons adapt to different landscapes. On the surface level, this is a critique of pet keeping and the unnatural domestic influence upon animals taken from their habitats. There may also be a parallel moral message depicted by Rango’s transformation. In the same manner that animals do not belong in domestic settings, perhaps humans shouldn’t dwell in animal environments, seen in the damage of animal habitat caused by human development and expansion in Figure Three. Natural boundaries should be respected, not abused.

However, the use of the anthropomorphic traits discussed above channel a sense of agency and emotional intelligence often ignorantly disregarded in a human’s view of some animals. This ignorance is proven by human practises like the meat industry – entirely upheld by speciesism. We conclude that some animals are innately beneath humans, and justify it through their inability to communicate and presumed secondary intelligence. Ultimately, their life is deemed to be of lesser importance if they are more valuable when dead. In Rango’s instance as an animated character, his extensive dialogue and frequent postmodern tendency to directly address the audience are both modes of breaking the boundary between animal and human. The self-reflective characterisation of Rango forces an audience to consider him as more of an intelligent agent and thus, we begin to reconsider our mental framework of animals and question our predisposition of indifference.

Animation provides creatures with a voice and active agency typically attributed to humans. In the instance of Rango and the human animal relation depicted at the beginning being commonplace in our everyday lives, an audience may delve further to recognise our innate tendency to manipulate animals. As Rango’s terrarium crashes, the shattered glass not only symbolises his sudden vulnerability but also his freedom – not as positive as one would initially think. Rango lays on the ground, existentially staring as seen in Figure Four.

The destruction of the terrarium symbolises the severed human animal relation that defined Rango’s life. However, the damage to his sense of animality has already been done, thus he struggles to reaffirm his identity as a wild animal suddenly free from captivity throughout the course of the film. The reference in this scene to lost animal identity in captivity forces a perspective of pet-keeping that is not so dissimilar from the exploitation in Figure Five.

As the terrarium falls in a distorted slow motion, the non-diegetic sound of orchestral symphony reinforces the disordered sense of abnormality within the scene. This use of surreal slow motion alongside the switch of angles of sequential shots in Figure Six, Seven and Eight emphasise the scale of damage and upheaval caused by Rango’s careless owners – both symbols of human carelessness. In Figure Six, the objects of human association are scattered amongst the destruction, symbolising the farewell Rango must say to his domestic life. As Rango splatters on the ground in Figure Eight, he is alienated and exposed. The slow motion chaos is then broken by a return to regular speed in the next shot, where the owner’s car speeds away unphased. The contrast of motion between the stylised slow annihilation of Rango’s home versus the instantaneous composure of the car is a method of highlighting the extent of damage humans cause in a seemingly inconsequential, momentary decision. The scene epitomises the lack of human responsibility for negative impact inflicted upon animal life.

The film’s reference to human responsibility and actions having consequences can be linked to a wider global crisis. We are all aware of our planet’s expiry date without effective social change, but the capitalist disregard for our planet and its wildlife has trickled down from powerful corporations into individual behaviours. It seems we are comfortable with everyday disregard for animal life and wild habitats, because we don’t see our behaviour as directly responsible for the problem. To humans, a degree of animal suffering in our lives is viewed as pitiful but inevitable – regardless of the consequences.

All other figures: Rango, 2011, Paramount Pictures.