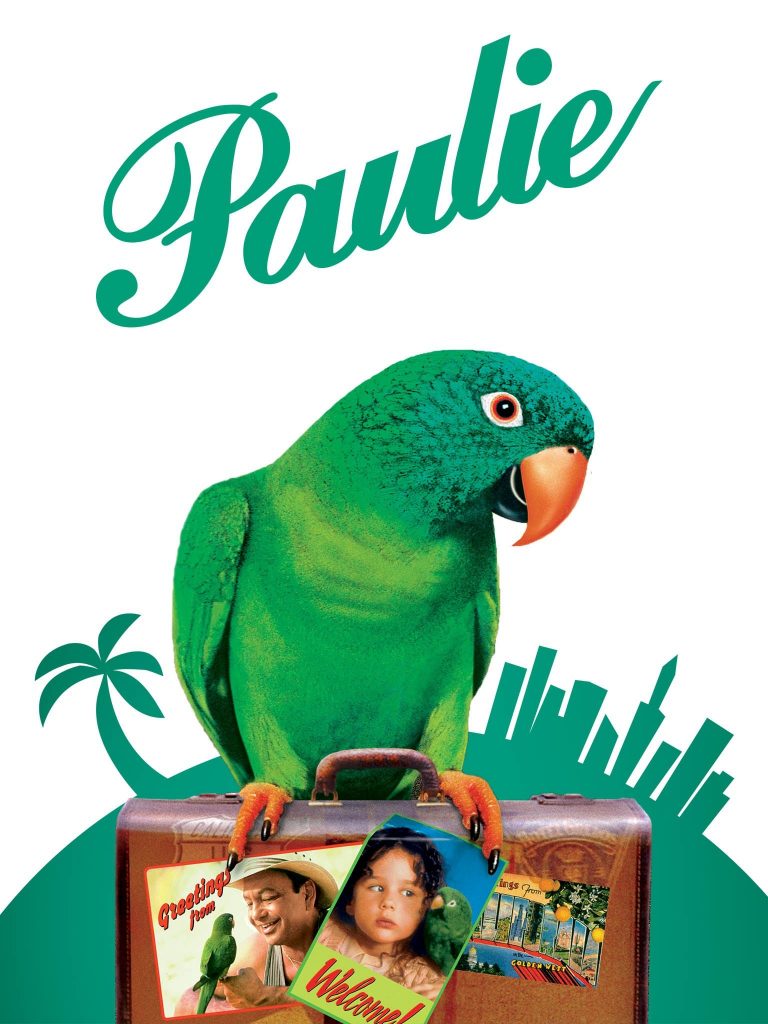 Paulie is a  blue crowned conure, trapped in a small cage within a Research Institute. When he befriends Misha the janitor, Misha realises that Paulie can do more than talk- Paulie understands! Paulie is a family film that uses comedy and lighthearted fun to discuss the issues it presents. Paulie’s ideal life is to return to his first owner, Marie -as she treated him like her best friend. This lifestyle was free from cages,no being commanded to ‘speak’ and other typical pet duties, the fantasy for many young children and their pets. Later, Paulie’s desire to attain freedom pushes the film forward- but interestingly, Paulie’s perception of ‘freedom’ is to return to his original owner.

Within the film,  we’re shown Paulie as a chick, being given as a gift from the parents of his first owner. Marie is a young girl that struggles with a stutter so she makes a conscious attempt to learn and pronounce words properly. As she does this, so does Paulie, learning words and engaging in full conversations with Marie. Paulie is first presented to Marie in a wicker basket with a folding top, locking him inside. Later, he is caged within the Institute- we regularly see Paulie trapped, as he is for most of the film, telling the story of his travels. The family film genre grapples with the presentation of the bird; both as a pet and as a prisoner, throughout.

Paulie is only able to live so freely throughout the film because of his unique traits, his ability makes the other characters value him highly, and so he is treated differently. Within the Research Institute, Paulie refuses to speak so he is exiled to a cage in the cellar. This creates a binary in which Paulie the parrot can either use human speech and be awarded a more free and ‘human’ lifestyle, or he can act within the expectations of a parrot, and be placed within a cage and left alone. This highlights the unfairness within the ways we treat animals due to their perceived ‘animality.’ My working definition of ‘animality’ is the behaviours, attitudes and action we have learned to expect from animals. These cultural expectations are often the subject of films focusing on animals, and their conforming or flouting of these values can shape the meanings we take away from them.

The actual ‘reality’ of Paulie is constantly played within the construction of the film. Although it is not immediately obvious, there were fourteen different blue crowned conures that were used to represent the character. Alternatively, in scenes where trained parrots couldn’t be used, an anamatronic Paulie was created. [1] The creation of a parrot puppet and use of specially trained birds shows the complete control of humans over parrots in both worlds, within the film as Paulie is trapped within the cage, and within the filming process, as the clipped wings are- at points -evident onscreen.

On his travels, Paulie meets another conure with an orange head and flutters down to speak with her. Blue crowned conures have the same colouring regardless of gender, but this intentional colouring makes them look different- as their differences are highlighted within the scene. She is ‘wild’, she chooses to have her own agency by flying away, and speaks with an exotic attractive accent. Her Latinx accent stands out when compared to Paulie’s own conventional American twang, continuing to point out that that Paulie is different, and therefore isolated until he can find where he is equal to others.This move away from the generic representation of all parrots instead ‘particularises’ Paulie and makes us feel invested in his outcome and centres him within the film.

This is an example of an animal interaction translated into a way humans can understand. We are used to this humanised presentation of Paulie and it is interesting to see this interaction with a parrot that is closer to our expectation of a real bird.Where Paulie is awarded personality, comedy and human speech, she is shown to reactively laugh at his comments.  Here, the narrative plays out to show the uniqueness of Paulie, reflected in how the other parrots treat him and conforms to other hetero-normative messages usually found in family films.

The scene is presented as a natural meeting of two exotic birds, however they are in a modern built up area, completely separate from a flock. Here, Paulie and his company are in an entirely constructed setting, with constructed conversation and off camera direction of movement from humans. There is nothing authentically animalistic about it. Paulie is shown to be fully anthropomorphised as he uses speech mannerisms such as ‘wow’, he tilts his head energetically when speaking and even shows offence when the other parrot leaves.

Early in the film, Paulie poses to be painted, when he does so it can be seen that the parrot’s wings have been clipped, as they are significantly shorter than the length of his body. The scene is presented as lighthearted, a display of how Paulie will playfully pose- however, many people would not recognise this harmful modification. Later, as a punishment for his actions, Paulie has his wings forcibly clipped in a scene that is torture-esque. The family film genre is faced with the challenge of creating a version of the scene that would be suitable for ‘family viewing’ while still being emotionally effective for the ‘dual audience of parents and children.’[2]

The British Field Sports Society has previously warned of the ‘potential power of animal visual imagery to arouse impassioned responses.’ [3] This scene is an upsetting example of the forced ‘sociocultural assimilation of animals as pets, man’s best friends, and quasi-humans.’[4] This ‘assimilation’ shows how Paulie is forced to adapt to the values of the humans around him, regardless of what is good for him. Taken into a room full of other caged animals, Paulie is held down- when cutting his feathers, the doctor remarks that ‘it won’t hurt’ him. Significantly, the human’s power over Paulie is shown through the way he is held down by multiple pairs of hands, and the doctors are looming and crowded above him. Another way that the film paints Paulie as unique or ‘particular’ is how the wing alteration is shown to be drastic and ‘wrong.’ Many pet birds have their wings clipped to shorten the flying ability, within the scene, we are conflicted as Paulie doesn’t fit into our perceived binary of wild or pet. If Paulie was a pet we’d be more inclined to accept this fate, but the freedom that we have come to associate with Paulie is being taken away. The emotional response from Paulie solidifies in the mind of the viewer that what has happened is wrong, the anthropomorphised bird screams in pain much like a human.

Paul Wells discusses Boria Sax’s ‘ﬁve key categories of animals as tradition— metamorphosed animals, divine animals, demonic animals, satiric animals, and political animals.’[5] Throughout the film, Paulie is a ‘political animal’ that tackles ideas of what it means to be ‘free’ and, opposingly, our expectations of pets. The freedom the film represents through the bird is contradictory, and in reality is an empty promise. Although a real bird, it may as well be animatronic as shown when he raises his wings- displaying evidence that it cannot really fly. Much like an animatronic, they lack the essential full flight feathers to actually take off, and the wings do not provide the freedom they signify. Although the American Humane Society worked within the film’s production, the clipped bird will have ultimately experienced an altered quality of life.

Paulie’s escape scene continues to prove him to be a ‘political animal.’ The family film here establishes the parrot’s move towards freedom. However, the genre convention of ‘being free’ is often entwined with the idea of ‘returning to nature’ or what is deemed to be ‘natural.’ Paulie never returns to Brazil (where sun conures originate) and his species are now considered to be endangered due to over-trapping. This series of ‘staged presentations’ show the control the humans have over this situation, and the whole world around them.The presentations reject a conversation on the ‘relationship between visual imagery and ethics’ and chooses to favour how the animal can be used to further the family film genre, and fit within its conventions.[6]  Jonathan Burt sums this up in the statement that ‘the animal is celebrated as a sign but not as a  body.’ [7]

As Paulie is about to escape the Institute with Misha, he insists they both stop to free the other animals. The room full of caged animals where Paulie’s wings were clipped is transformed into a room of open cages, filled with an assortment of free roaming animals. This poses a conundrum within the logic of the film, which could also be labelled with Well’s Madagascar Problem. Various birds are shown to flutter around the heights of the room, and a monkey can be seen to be playfully pulling at a formal document, but none of them truly escape. The ‘animal narrative’ that is posed for Paulie is his desire to be free, but creates a problem when the narrative does ‘not manage to accommodate what may simplistically be called recognisably true animal behaviour and primal motivation.’ [8] As Paulie sits waiting for Misha to open the screen and let him out of the window to freedom, he stops and looks around the room. There are close-up shots on a variety of caged animals’ faces: dogs, pigeons and chimps. The soundtrack is filled with barks, fluttering of wings and the screeching of primates. It creates an overwhelming feeling of panic as one feels unable to escape the feeling of being trapped too.The family film genre is forced to avoid the presentation of the would-be chaos of ‘true animal behaviour’ that would occur within this mass freedom event. Instead, the mise-en-scène exhibits a ‘model of apparently civilized social order’ where the animals help each other to unlock cages and group together with their species.[9] Unfortunately for these animals,especially the primates, if they were to escape into a public domain, they would most likely be located and killed.

All of these questions begin in the opening scene, as Paulie in the small cage is presented as normal to us, as the concept of the bird within the cage meets our expectations. Interestingly,the audience is only shocked when it’s found that Paulie can hold a conversation like a human. Many birds can speak, but we do not afford them the apparent luxury of a life of freedom. Paulie is signified to be different through his witty retorts and sense of humour, much like a human. The film’s perspective only works because of the ‘particularisation’ of Paulie which is typical of animals in the family film genre. It calls into question the binary of friend and pet, and how we choose how to divide relationships into each. Paulie must show lack of ‘animality’ and instead be ‘anthropomorphised’ to be awarded with a life that is ‘free.’ This brings to mind other films such as ‘Ratatouille’ that come to an end which feels satisfaction for only the main character. Having watched these animals with distinctly human qualities, we are happy for them to live a life that aligns with our own expectations – living in Paris, or finally becoming reunited with their owner, retrospectively. However, if we were to reflect too deeply on the events we have witnessed, we may lose the satisfaction that is ultimately only skin deep.

American Humane Society and their work within Paulie:

The Hollywood Family Film : A History, from Shirley Temple to Harry Potter by Noel Brown: